Woman ruins her neighbour’s wedding by mowing her lawn

Jonathan Searle, who had a small role in the movie Jaws, has become the police chief of the town where the movie was made. Jaws was filmed in Oak Bluffs, a small town in Massachusetts. Jonathan Searles and his brother Steve, played two children who staged a shark hoax using a fake fin. Searles has been a member of the town’s police force since 1985 and was involved in charging a man for lying about there being sharks in the area.

An American woman has been roasted online for her comments about Australian coffee. Erin Fang, a travel influencer, posted a video titled ‘What not to do in Australia’. “Don’t fall for the coffee. We heard that Melbourne had the best coffee, but it just didn’t live up to the hype.” Considering Australia is known for having some of the best coffee in the world, many people were infuriated by her opinion. “Australian coffee is among the best in the world get your taste buds right miss sugary Starbucks.”

What did you think of these Newsli stories? Let us know by texting or messaging us on socials then catch up on the latest Newsli headlines below! 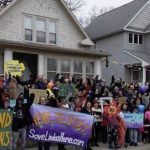 Why have a wedding?