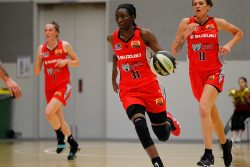 On Saturday The Perth Lynx had their biggest victory of the season with a 113-67 win over the Sydney Uni Flames in Sydney.

Perth tallied the biggest score of the WNBL season so far to claim their seventh win, after a disappointing loss to Melbourne last week.

Asia Taylor was a star for the Lynx scoring a game high 27 points, 7 rebounds and 2 steals, with an efficient 64 percent shooting performance.

Ali Schwagmeyer returned to the lineup after missing one game due to injury, and scored 19 points, 7rebounds and 3 assists.

The dominance from the Lynx allowed Schwagmeyer to ease back into action, who only played 22 minutes.

The Lynx built a 20 point lead in the second quarter and didn’t let their foot off the gas, extending their lead to 48 points at one stage.

Kayla Steindl was everywhere with 16 points, 7 rebounds, 3 steals and only missed two of her shots.

In only 23 minutes, Brittany McPhee scored 21 points, and grabbed 5 rebounds.

The Lynx will now return home to Perth for a Friday night game at Bendat Basketball Centre against the UC Capitals.