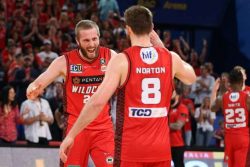 On Sunday the Perth Wildcats came from behind to defeat the New Zealand Breakers 91-86 in dramatic fashion at RAC Arena. It was the second time in three days these two teams had met, with the Wildcats beating the Breakers in overtime on Friday night. New Zealand led by as many as 16 points in the second quarter, after getting off to a hot start.

With Star Bryce Cotton on the sidelines with a hand injury, it forced everyone in the team to step up in a crucial time. The Wildcats took the lead for the first time in the game with 2:52 left in the fourth, after a clutch three-point shot from Terrico White. White finished with 21 points, 5 rebounds and 5 assists.

Coach Trevor Gleeson said White is one of those players who revel in the big moments.

“He’s a guy that wants the ball and he can finish it, the resilience is first class,” he said

Gleeson said the Breakers are a hard team to beat when they build a big lead.

“We had no right to win that game, but it was just pure heart and grit that got us over the end against a pretty good opponent,” he said.

Nick Kay was a stand-out again with another double-double to his name, scoring 22 points, 12 rebounds and 5 assists.

Gleeson praised Kay’s consistency and his ability to play hard when it counts.

“Nick was unbelievable out there today, he’s just a workhorse,”  “He just a great teammate to have and he does everything for the team first. He’s probably been our most consistent player through this injury riddled period without question.”

A fourth quarter scoring outburst from Jesse Wagstaff helped the Wildcats over the line, after being down by nine points halfway through the last term. Wagstaff had all of his 13 points in the final quarter, to go along with 2 rebounds, and 2 steals.

The Wildcats went into the halftime break with a 13 point deficit, after shooting only 30.8 percent from the field.  Perth outscored New Zealand 55-38 in the second half. Wagstaff said the team wasn’t playing their usual brand of game.

“I don’t think we were playing basketball that we can be proud of. They were leaking out, getting offensive rebounds, and that’s just not us,” he said.

Wagstaff said the team is coming together with the absence of some important pieces of the team.

“We’ve had our injuries, and every time will have to fight through that at some stage of the year usually, but it’s nice to pick up wins while guys are down,” he said

After Round 7 the Perth Wildcats sit on top of the NBL ladder with a 10-1 record whilst the Breakers sit 6th with a 4-7 record. The Wildcats will now have a 10 day break before flying to Sydney to take on the Kings on Thursday, 6 December.