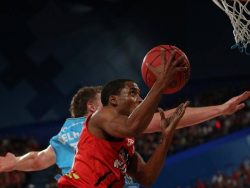 On Friday night the Perth Wildcats headed to Adelaide Entertainment Centre to tackle the Adelaide 36ers ending there tough stretch of five-straight games on the road winning 99-95.

Dario Hunt had his best game for the Wildcats scoring 19 points and 8 rebounds Nick Kay was the top scorer with 21 points and 8 rebounds and was named the player of the game. 6 time defensive player Damien Martin showed why he is the game’s best defender, stepping up late in the game with some important steals and blocked shots.

On Sunday the Wildcats backed it up with a 88-77 win over the Breakers at RAC Arena. Bryce Cotton was electric scoring a game high 34 points and 4 assists, Veteran Jesse Wagstaff stepped up when it counted and scored 14 points. Damian Martin led the Wildcats with 5 assist and 2 blocks while Nick Kay had 8 rebounds.

Coach Trevor Gleeson was impressed with the team’s defensive effort.

“I thought it was outstanding. Defensively, to hold a team like that to under 20 points in three quarters is an outstanding effort. Coming back from a back-to-back, a tough game Friday night, you wonder how you’ll respond and the guys played outstanding,” he said.

“Offensively, when Bryce, Clint and Terrico get going it’s pretty good, and Jesse got going late in the game and we found him for two (threes)…We talk about our group intelligence out on the floor and we did that well

Only down side was the injury to star Import Terrico White who suffered a knee/ankle injury.

The wildcats have now moved to 2nd on the ladder with a 8-3 record and face the 7th place Cairns Taipans on Saturday at Cairns Convention Centre.