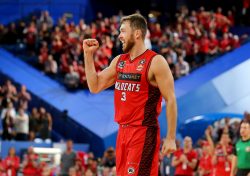 The Perth Wildcats have claimed their fourth consecutive win in a high-scoring showdown with the Illawarra Hawks on Friday night, the final score 104 – 90.

Bryce Cotton led all scorers with 27 points, and dished out a career-high 7 assists to go with 5 rebounds.

Nick Kay continued his consistent form as he had 17 points, 12 rebounds and 5 assists to be named the Bunnings Player of the Game.

Terrico White helped the Wildcats off to a quick start with 9 first-quarter points, and finished with an impressive 26 points, 2 rebounds and 2 assists.

White said Perth’s recent form is coming at the right time with the regular season drawing to a close.

“It’s playoff time, as a team we’ve all got to step up, including me,” he said.

Brian Conklin led the Hawks offence with 20 points and 8 rebounds. He was helped by Jordair Jett’s 19 points off the bench.

With the Hawks battling to stay in the playoff hunt, Trevor Gleeson said the team was ready for Illawarra to throw everything at the Wildcats.

“It’s always hard to play a team that’s still fighting for a chance, and Illawarra played great, they gave it everything,” he said.

“I’m happy the guys persisted, and you have to find different ways to win, and we certainly did that tonight.

“Sometimes you just need to show that grit and play, and our characteristic of the team is that we’ll stand up and fight, so I love that about us.”

The Wildcats will now have a nine day break before their next game.

Gleeson sees the break as an opportunity to get some needed rest to the players with heavy minutes.

“We’ll review this, rest up, and prepare for the Sydney Kings now,” he said.

The Wildcats face Andrew Bogut and the Sydney Kings next Sunday at RAC Arena in a game with massive top-four ramifications, Illawarra Hawks will look to bounce back against the Cairns Taipans on Monday Night.

Win ‘Miss Fisher and the Crypt of Tears’ cinema passes