Every now and then someone tells you a story that is so outlandish you just think “there’s no way that’s true”. The fact is, some stories just aren’t true. But do you have the investigative skill to pick? 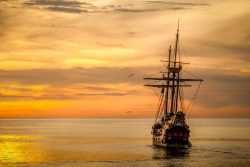 Every week Kirste and Dan try to trick each other with a Wild Whisper. A story that’s so crazy, so far fetched, that it’s almost unbelievable. However, sometimes, that’s all they are. Complete fabrications designed trick not just each other, but the listeners too!

This week, Kirste regaled us with the tale of the cannibal rat ghost ship:

“In 2014 there were media reports in Britain and Ireland, warning people there was a ghost ship. Not just a ghost ship, it had on it… Cannibal Rats. Rats that were making their way to the coast. The ship had lost its mooring years before, and the rats had realised they were the only food source on board.”

So, what do you reckon? It’s not every day an entire ship goes missing. It’s also not every day that rats decide to go cannibal. Or maybe it is. I don’t know much about rats.

To hear the full details of the story, and whether we really should be worried about cannibal rats, check out the podcast below:

How do you stop losing your TV remote?