When did your pet know something was up?

Animals have been known to detect earthquakes or natural disasters before they happen by sensing changes in the environment before humans. They can also sense pregnancies and have the urge to protect their humans. 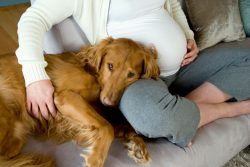 Joseph and Jo’s dog suddenly became very protective. “Had no idea why and then discovered I was 8 weeks pregnant. A miracle in itself because we we’re told we couldn’t conceive naturally!”

When did your pet know something was up? Let us know your thoughts by texting or messaging us on socials. Listen to the full chat below!