What was the weirdest thing someone stole from you?

Someone stole the license plate on the back of Jeziel’s car! 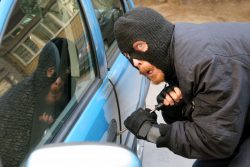 Josh noticed the window on his car was smashed, and his sunglasses were missing. “They’re prescription glasses and I’m as blind as a goat. So it’s useless for them anyway!” Malcolm had a lock on his bike to prevent it from being stolen. “Someone stole the lock and not the bike.”

What was the weirdest thing someone stole from you? Let us know your thoughts by texting or messaging us on socials. Listen to the full chat below!