Kirste was tasked with registering and selling a car. But it wasn’t as easy as she thought it would be…. 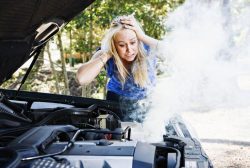 The car was in good condition but it wouldn’t move so they had to tow it to the mechanics. The mechanic said the previous owner had put way too much oil in the car. He drained the oil but they was some left in the engine so he told Kirste to drive it around and burn off the excess oil. But while she was driving she noticed her surroundings looked misty and the air smelled weird. “In 5 minutes the car was completely covered in white smoke. It was burning the oil but because I wasn’t driving I was just encapsulated in it.” So Kirste and Dan wanted to know what was burning?

When Dan worked at Sydney he looked out the window and saw a car that was smoking. A family jumped out of the car before the bonnet of the car burst into flames. “The whole thing goes up in fire. The same car that I drove so I sent a photo to my mum and she freaked out!”

Reggie used to work at a dealership. “New European cars come with a protective coating on the underside. Test driving it, the smoke was unbelievable on one particular model. Another motorist pulled up beside me in a panic, thinking it was on fire.”

Annette was driving her van and stopped at the lights. A workman told her smoke was coming out of the bottom of her car. She called the firefighters and opened the seat to see what was going on. “The flames were everywhere and the only thing that survived was the Bible.”