What misconceptions do you have about Australia?

Jeziel found an article that shares misconceptions that non-Australians have of Aussie culture. There were 9 found on this arti 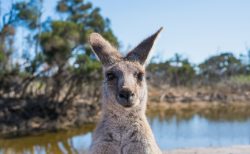 cle and they are:

Thus, Bec and Jeziel HAD to ask the question, “What misconception do you have about Australia?”

The family got in touch and Daniel gave us a call and he said he knew someone that tricked an overseas student, telling her that she wasn’t allowed to bring wooly jumpers to Australia. She came over in July and was freezing!

Andy gave us a ring and before she moved to Australia everyone told her that Perth was a sunny island where the temperature stays between 25′ – 30’C all year round. She came in May and was freezing and had to buy new clothes!

What misconceptions do you have about Australia? Get in touch with us, send us a message on our text line or hit us up on our socials on Facebook or Instagram.

Hear the full chat below: