40 years ago the language was illegal, now two books of the bible have been translated into Nyoongar

The project of translating the bible into Nyoongar began in the 90’s. So far two books have been completed. Luke was the groundbreaking but exhausting first section. Overseen by the Rev. Dr John Harris, the Senior Bible Consultant for Bible Society Australia, with a team of twelve, Luke was completed in 2014. Tom Little, a Nyoongar translator, undertook the project of Ruth on his own. As 98% of the language used in Ruth was already translated in Luke, it only took four months to finish. 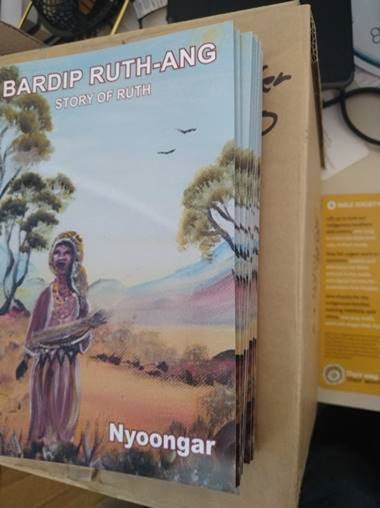 Not too long ago, Aboriginal people were banned from speaking their own languages. However, Tom’s family were determined to keep their language alive. They spoke it, quietly, at home and where they couldn’t be heard.

“Which was crucial, our language contains all our culture, all our ceremony, all the sacred and secular news we required.”

Tom’s family took this risk because they knew one day they would have the opportunity to speak it in pride and create pathways to bring it to the mainstream. That is exactly what this project of translating the bible has been about.

“There is a huge benefit right upfront. I get the joy of seeing my people read the Word, the Gospel in their own hard language. Shades of meaning? There are several; the scripture, there is the translation and the back-translation into Nyoongar-English, or English as a Noongar person, so that they might be able to speak it.”

The books have been deliberately designed in Nyoongar and Nyoongar-English so that you can read them in conjunction with each other.

So if your understanding isn’t strong one way, it can become stronger by reading it the other way. This is monumental for Indigenous people here in the south-West, but it as just as powerful for the White Fellas. It gives those who don’t speak the language an understanding of how a Nyoongar person would read and experience the bible. Tom had partnered with The Bible Society to raise financial support for the project, they raised the necessary funds but some of the reactions they were met with were pretty naive. Many people said “I thought already had an Indigenous bible” or “why do we have to spend so much money to translate for such few speakers.”

Firstly, The Bible Society believes that “no one can decide who deserves to hear The Word, The Gospel is for everyone.” Secondly, this is a world-first in bible translation. This project is giving a language that has been put to sleep, revival. It’s not a dead language, it’s a living, breathing language, and this book is giving it a revival. There are chaplains in prisons and chaplains in schools using these books to connect with Indigenous people.

The Book of Ruth will be available at Koorong later this month. Give to support Nyoongar Bible translation work, find resources in Australian Indigenous Languages or purchase the Nyoongar/English Gospel of Luke here.