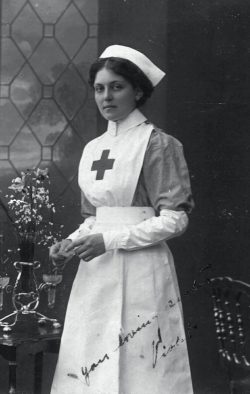 About Violet Jessop, aka Miss Unsinkable. In 1910, Violet was a stewardess aboard the one of three Olympic class cruisers. A year later while she was working on the ship, it collided with a British warship while passing through a narrow strait. Both ships were damaged but fortunately there were no fatalities. Violet was then employed by the RMS Titanic. She was onboard when the Titanic struck an iceberg and sank, but she survived by finding a lifeboat. Violet also served as a Red Cross stewardess on the HMHS Britannic, which hit a German mine and sank. While escaping she was almost sucked into the ship’s propeller blades but managed to escape. This cemented her reputation as ‘Miss Unsinkable’.

How to properly dispose of an Australian flag. When the material of flag deteriorates it should be destroyed in a dignified way. Cut the flag into small unrecognisable piece, place it in a sealed bag or container then place it in the rubbish bin.