Teenagers called ‘geniuses’ after a fake phone trick on their parents 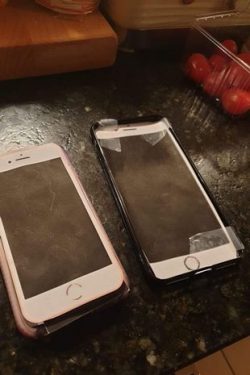 Image from The Mirror

Two teenagers have been called geniuses after they created fake phones to avoid their screen time ban.

Step-brothers Fabien and Ben, both 14-years-old, weren’t happy when their parents banned using their phones after 9 pm. So they devised a plan to trick their parents into thinking they had given up their phones. They padded their phones cases with paper and taped a photo of an iPhone on top. Their plan worked for a few hours until their parents became suspicious of how eager they were to give up their devices. So Bec and Jeziel wanted to know what did you ban from your kids?

Debbie said, “I banned my kids from drinking straight out of the milk bottle.” Kelly banned slime and play dough. “After too many carpet related incidents. Good fun to play with but it gets everywhere!”

James wanted to limit his kid’s screen time. “Used a DNS filter that would limit what was streamed or internet usage. They got themselves a VPN and it took me so long to know about it.”

What did you ban from your kids? Let us know your thoughts by texting or messaging us on socials. Listen to the full chat below!