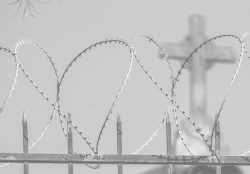 He said, “on Thursday 4th March, the Cathedral will again host the historical play, ‘A Sleep of Prisoners’.

The play was first performed at St George’s Cathedral in 1961 and broadcast live on the ABC.

It was Christopher Fry’s lyrical meditation on life, death, violence, and purgatory.

Set during World War II, four English soldiers are trapped in a bombed out Cathedral. It reveals the dreams of each soldier and their attitude to life and death.

Listen to the whole conversation below.

What did you walk into?

A message we received from a listener in the USA

WIN: Take your family to see ‘Dreambuilders’ in cinemas!

Your Reading List Just Got Longer: The Christian Book of the Year Shortlist

Elise and Matt, One Year After ‘The Block’