How much do you spend on clothes? Did you know that the average Australian spends $2000 on clothes a year which equals $166 a month. 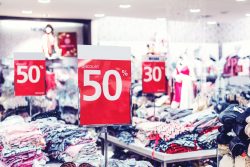 This week on The Drive Show with Bec & Jeziel, they wanted to know if this statistic is true and reached out to listeners to hear how much they spent last year on clothes. This also includes accessories like shoes, jewellery glasses and hats. Jeziel revealed that he only spent $205 on clothes last year. “I purchased a new pair of shoes, three tops, pants, undies sunglasses and a Christmas jumper. All up $205.” Meanwhile Josh texted in “I spent more than the average male.”

Isabella texted in “ I spend $8-12 on clothes a year depending on how much mum goes to spotlight because I make some of my own clothes, I’m nine”

Sam texted in “Not much on myself but around $2000 on my kids.” Bec also thinks she spends a lot more money on her kid’s clothes than her own. However, Bec’s husband used to spend $5000-$7000 dollars on clothes each year when he was in his twenties! “He was fashionable, he used to buy a pair of shorts for like $100. But now he spends like $200 a year.”

So how much do you think you spend on clothes? Are you someone who enjoys shopping for the latest trends or would you rather save the money for something else? Let us know by texting or messaging us on social media.

Do You Talk To Strangers?

How Much Time Do You Spend Streaming TV Shows or Movies?

How many hours do you spend on your kid’s sports?

How many hours a week do you spend reading a book?