Pop Up Globe: You must go and visit Shakespeare’s Home (Review)

Pop Up Globe is the world’s only replica of Shakespeare’s second Globe theatre, and has arrived in Perth!

Underneath the warm, starry night last night, it felt like I was walking up to a scene from a fairy tale. The three-storey, round theatre really did look like paper, springing to life from a pop-up book! 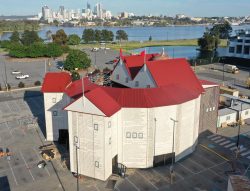 Pop Up Globe at the Crown, Burswood. Via: StageKings

After you climb the scaffolding and find your seats, it takes a few moments for the whole setting to really sink in. You’ll first notice the standing section on the ground floor or the ‘groundlings’ area. Then you’ll spot a few audience members in ‘The King’s Booth’ who become a part of the scenery. As you continue to look around the gloriously painted set and opened air roof makes the whole atmosphere absolutely magical.

No matter where you sit, you won’t be more than 15 metres from the action. But I have a sneaky feeling that the cheapest tickets are actually the best in the house.  For just $29 you can be a groundling. You’ll be drawn into conversations with the characters, in the “splash zone” and potentially even pulled up on stage! (There was one particular curly-haired, overall-wearing young guy who stole the scene after being escorted on stage by the cast.)

Now when I say “splash zone”, I’m not joking.

Even though in last night’s Twelfth Night, there was only a little seawater spilled, other plays like Midsummer Nights’ Dream promise the spillage of “litres of blood.” The Pop Up Globe very proudly boasts the fact that they’re the largest importer of stage blood in the southern hemisphere! 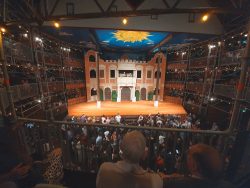 Going into the performance, I knew just a little of the story and watched it with someone who knew nothing of it. I promise you, we were both giggling and clapping and smiling the entire way through! Artist Director Miles Gregory has vowed to stay true to the text (other than a few 21st-century jokes to keep you on your toes) with bawdy, hilarious and brutal entertainment. So if you thought Shakespeare was four hours long and dull, you’re not going to get that here.

But if you’re still a little intimidated by the thought of Shakespearean, old English, don’t worry about not following the plot because the cast and crew do an incredible job of telling the story through context.

If that still isn’t enough to convince you to snap up tickets I have a little hack for you.

This may make Shakespeare turn over in his grave but here we go.

Book tickets to one of the Twelfth Night performances and then go and watch the movie She’s the Man. That’s right, the one with Amanda Bynes and Channing Tatum. It’s a modern retelling of Shakespeare’s play! So when you hear the names Duke Orcino, Olivia and Sebastian and match them up to the characters in the movie, it’ll help you find your bearings a little. 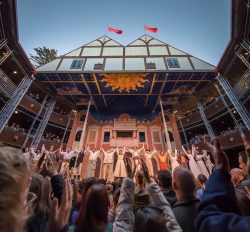 Pop Up Globe stage from the ‘groundlings’ area.

There are 4 plays being performed during the 6 week season here in Perth. Hamlet, A Midsummer Nights’ Dream, Twelfth Night and Measure for Measure. So whether you’re looking for something to do on date night or with your older kids there’s a few different genres to choose from. Plus, if you arrive a little early you can enjoy the food and drink trucks. (The nachos from the Merrywell truck were DELISH.)

Find out more about The Pop Up Globe.

98five is hiring a Marketing Manager

We’re looking for a Media Marketing Consultant – join the team!