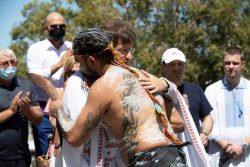 Every day Kirste, Dan and Leon serve up a yummy dish of Newsli. (Like Muesli, get it?)

Cheese expert, Edward Hancock, has revealed his secrets to the perfect cheeseboard. He suggests having a range of, no more than, 4-5 cheeses. “Four or five gives you enough chance to showcase a different variety of cheeses.” He also recommends storing your cheeses at exactly 8 degrees.

Perth’s Maori and Aboriginal communities have shown their support for Ukraine. At a Ukrainian Catholic Church in Maylands on Sunday, they performed their own cultural ceremonies as a sign of respect and solidarity.