No Sign of Premiership Hangover as Eagles Crush Dockers 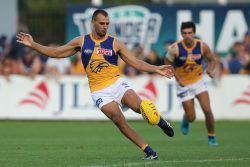 No Sign of Premiership Hangover as Eagles Crush Dockers.

In their last JLT game before round 1 West Coast Eagles convincingly beat the Fremantle Dockers winning 109-58 at Ruston Park in Mandurah. Eagles star Defender Brad Sheppard was brought from the field in the first term after a collision with Fremantle giant Rory Lobb but started back on the ground in the second quarter after passing a concussion test. Sheppard Lasted only minutes before again coming from the ground, taking off his boots and icing his leg, Sheppard has 13 days to recover ahead of round one in Brisbane.

West Coast dominated stoppages 55-27 clearances, more importantly, centre clearances 18-5 given the new 6-6-6 starting position rules. When Nic Naitanui returns from Injury the Eagle’s Midfielders will be licking their lip, and the forward line will get great delivery and be very tough to beat.

Tom Hickey looks likely to partner with Nathan Vardy for the season opener against Brisbane after another reasonable display.