NEWSLI: A man is lucky to be alive after tripping over his cat

A man is lucky to be alive after tripping over his cat.

Chris Rowley broke nine ribs, fractured his spine, and cracked his skull which left him with a bleeding brain. The hairless sphynx jumped up and latched onto the man’s leg. As he tried to move out of the way, he slipped down the stairs. He was left with catastrophic injuries and stayed on the floor until his wife found him the next morning. He was hospitalised for 2 weeks and was unable to work. 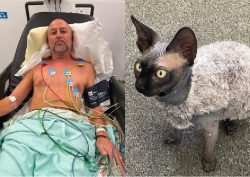 A man had an earbud lodged in his ear for five years.

Wallace Lee said he was going deaf in one ear. He initially thought his hearing loss was due to working in the aviation industry or from an old rugby injury. He bought an at-home endoscope kit and found a small white object stuck in his ear. There was an instant relief when he visited the doctor to have it removed. He believes the earbud got stuck on a flight to Australia. The attachment n the earplugs he bought must have gotten stuck in his ear canal.

The tech pioneer’s brown suede sandals were expected to make $60,00. But were instead sold for $218,750 accompanied by an NFT. It set a record for the highest price ever paid for a pair of sandals at auction.