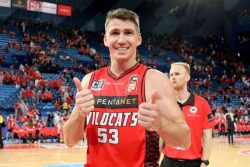 The Ladder Leading Perth Wildcats have defeated the Cairns Taipans 10th straight defeat in the final game of round eight 94-72 in a wire-to-wire victory at RAC Arena on Sunday afternoon.

Perth had a hot start, outscoring Cairns 31-17 in the first quarter, with 18 points coming from the bench and nine points from Nick Kay.

Trevor Gleeson said Kay is finding his spots in the game, and he’s producing at a high level.
“He’s been Mr. consistent and reliable, he’s been fantastic out there,” he said.

The Wildcats pressure didn’t let off after the first, keeping a demanding lead through the second quarter, taking a 14-point margin into the half time break.

Gleeson said they made their mark early and kept it rolling throughout the game.

“I thought we put a really good stamp on the game at the start of the game, we came out with a real good focus and energy,”

Cotton said the injury didn’t worry him, and he feels confident after getting back on the court.

“Once I got the adrenalin going I was able to get my mind of it,”
“It was a very fast paced game, and once the crowd kicked in I was good to go.”

Cairns guard Melo Trimble, who averages just over 23 points a game, was kept to only 8 points with some stellar defence from Mitch Norton and Damian Martin.

Gleeson said it was a focus for the team to keep Trimble quiet.

“It took him out of the game, and that was a big part of our game plan,”
“To have that combo of Mitch and Damo on the guards is fantastic.”

After a poor shooting game against Sydney, Terrico White filled the stat sheet, scoring 15 points, 6 rebounds and 3 assists, an efficient 53% from the field in 25 minutes.

The Wildcats faces a tough double header as they will now face the Sydney Kings in Perth on Friday night 14 December, before travelling to Melbourne.