A man was imprisoned after illegally building Britain’s biggest mancave. He has since been released and is already annoying his neighbours.

Graham Wildin, a wealthy accountant, installed a bowling alley, cinema, casino and bar in his 12-bedroom house without planning permission. After failing to comply with the court order to demolish the additions to his home, he was sentenced to six weeks in jail. Now that he has been freed his neighbours are outraged. Making several complaints about his vintage car collection blocking the road and visitors causing traffic in the streets. 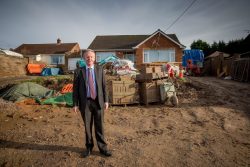 So Kirste and Dan wanted to know what would you add to your house if money, space and approvals weren’t an issue. Andrew wants a futsal court with fold-back basketball rings. A full outdoor kitchen including smokers, air fryers, pizza ovens and barbeques. But the most important addition would be a room full of his military memorabilia and a section for his Collingwood merch. “I’d have all my Collingwood memorabilia, my signed posters all there.”

Alex would install a room just for VR gaming. “One big room take out all the furniture and map it out for virtual reality gaming. I could invite friends but when the game is over you are out.” Lindy would add rooms to her house where homeless people and their pets could live. “Because the amount of times you have to leave your pet behind because you’ve lost your house is heart-breaking.”

What would you add to your home? Let us know by texting or messaging us on socials. Listen to the full chat below!