Masterchef’s first elimination episode was surprising to say the least!

Well MasterChef is BACK for another season of high drama, tense moments and food to drool over just after you’ve finished your own dinner. 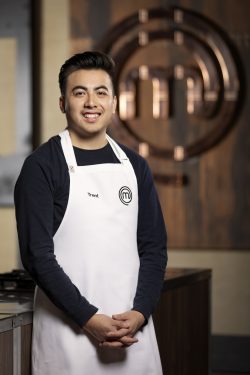 It’s been an exciting couple of episodes so far, and last nights episode was just as entertaining with the first elimination! The challenge was set: CHICKEN OR THE EGG in which the contestants had to choose either the chicken or the egg to be the feature of their dish… However if they were unsuccessful in advancing after the first cook off they would have to cook for their lives using the other ingredient!

Well let me tell you the heat was well and truly on. The first cook off saw highlights such as “Strange Spice” and Perth’s own Justin with his Charcoal Chicken… And some low lights… Namely Trent’s lonely egg tart.

Round 2 was the last chance for 5 contestants to show their stuff and hold on to their spot. In the end poor Trent just couldn’t meet the grade and OVER did it with the lemon myrtle…
We got the chance to speak with Trent this morning! Have a listen below!