Are you living the ‘two chevrons apart’ life?

As a pastor I make it my aim to encourage people to live life, and especially church life, in a “keep apart two chevrons” manner. Let me explain.

If you’ve ever driven on a UK motorway you’ll see the sign as you hammer along at the usual twenty or thirty (miles) over the speed limit. Chevrons are those arrow signs, and they’re painted on the motorway for a good reason.

They’re there because the speed you are travelling will, over time, lull you into thinking you are not going as fast as you are. It’s called speed intoxication. It’s that feeling you get when you slow down through a country town in rural Australia after two hours at maximum speed limit on an open road. It feels like you’re crawling, until of course you hit something, or someone, and then you realise that 60km/h is just as deadly when it doesn’t feel like it’s 60km/h. 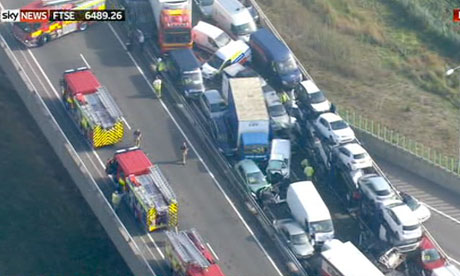 You get the picture.

The “keep apart two chevrons” campaign was designed to stop this happening. The signs and the chevrons suddenly pop up to re-calibrate you, to give you a little shock and ensure you to keep a safe distance from the car in front.

You think you are in control at high speed. But over time you creep up on the car in front thinking you are in control. And you are. Unless something untoward happens on the road and then it all gets out of control pretty quickly.

Life in our modern West could do with a “keep apart two chevrons” policy. So could life in many of our modern Western churches. The mantra among many evangelicals is often “Couldn’t we be doing more?” And the answer is “Yes”, it’s always “Yes”. Of course you could be doing more. The question to ask is “Should you be doing more?  The “Could” question could be being asked because people are being lazy in church. Or it could be being asked because people don’t have a fixed understanding of their justification, hence they fall into the trap of self justifying through “doing more”.

I am convinced we’re in danger of taking our cues among God’s people from the rush, rush, rush of our frantic world, in which speed intoxication kicks in, only for people to come to a screeching halt and a pile up in a jumbled mess of family problems, depression, burn out, anxieties, and self-loathing at the number of dinner dates on weekends that you simply couldn’t say no to. We just don’t feel the need to keep apart two chevrons. The speed of modern life has intoxicated us.

It’s a good idea as a church leader to test your other leaders from time to time by asking them what their lives looks like. Get them to paint a picture of family, work, sicknesses, elderly parents, stage of life for kids at school, that sort of thing. Then ask them what they are capable of. Ask them what ministries they have added in to their lives. Ask them if they should be taking on more if they are the ones saying asking the “could” question.

And then ask them whether if a proverbial car crashed up ahead of them would they have time to stop, or would it be a case of slamming on the brakes knowing you are going to have an almighty crash, with bits and pieces flying everywhere. Are they able to “keep apart two chevrons” in how they drive their lives, and in such a way that they model that to other people?

In a sense we don’t want our leaders to be the busiest people. Some will be for sure. But we want them to be the people who use their time well, who get things done, but who have time to reflect on what they are doing, not simply uncritically do it before moving on to the next thing.

We don’t run programs as such at church because we know that if we have the two or three big rocks in the jar (for us that’s regular church gathering attendance, a monthly prayer meeting, a monthly pastoral community group meal), the rest will take care of itself.

And guess what? It is. People are finding their level, organising a one-one-one Bible study if they can; younger people are meeting for food and Bible, young mums are hanging out and encouraging each other; families are having meals together. Oh, and they’re serving outside the church in the local community. We outsource that sort of stuff rather than start it ourselves since we don’t have the capacity to run it. We’re realistic about what we can and cannot do.

Granted some people have more capacity than others, and can juggle much more, but I see no good reason to fill in all of the white space just because it is there. No reason to drive bumper to bumper. For a start it gives you very little reflective time spiritually, and that always, always means there’s a bit of wiggle room for the Accuser to get hold of you. Unthinking fast paced living can be a real danger spiritually and morally.

Does that mean that if you as a couple hold down a job each and you have three kids, two at high school and one at primary school, and you serve in church at a leadership level, then you shouldn’t take on that extra small group the pastor is asking you to lead?

Perhaps not. But perhaps you need to realise that the most important small group you are called to pastor is your family. If your family is constantly living on spiritual fast food and an out-the-door-rush-on-a-Sunday-morning, don’t assume you can maintain that speed for long. Don’t assume a proverbial tyre won’t blow. And if it does, unless you are keeping two chevrons apart then you could well be headed for a crash.

Of course there is always a place for families to reduce the number of external activities they do. But even day-to-day “have-to” life in modern Western cities keeps many families at capacity, without even adding in all of the extras. But the solution is not to keep people busy at church just to keep them away from being busy in the world. Chances are all are you are doing is baptising busyness. That’s a sure fire recipe for boom and bust ministry leaders who suddenly announce they need six months off.

Another thing: keeping two chevrons apart frees us up should God decide to plant someone or something into our lives that requires his grace and his love and his message. If God brought someone across your path who desperately needs your help and to experience his grace in their lives are you travelling at such a speed that that would not cause a crash?

Would it merely require a slight tap on the brakes, or an adjustment to your speed, rather than a complete wheel lock up, with smoke pouring off the road and the bumper of the car in front screaming up into view?

Because if screeching tyres and grinding metal is what’s happening right now to you, then it’s too late, you can’t back engineer it. You’ll have to deal with the tangled mess before getting back on the road, and decide from now on to keep apart two chevrons.

This article was originally posted on stephenmcalpine.com as Church life: keep it two chevrons apart

On living a proactive life

10 ways I’m bringing inspiration back into my life