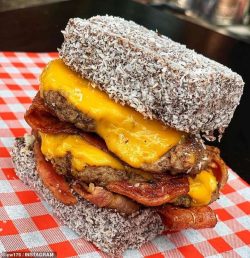 The photo above along was uploaded to Instagram along with this caption: “Alright, she’s on! Australia Day is coming and we’re rolling out the specials! Double beef, double bacon, double cheese between two Aussie lamingtons! Say what you want … you know you love it! Available Australia Day week!”

Every true blue Aussie loves a good burger and loves a good lamington. However, this mashup has divided the nation. Mike and Corey first described this devilish creation on The Summer Brekky Show on Tuesday. Since then we’ve received over 300 comments on our Facebook page of people sharing their opinion, including:

“I am up for the taste.”
“My arteries on my heart really hurt looking at this.”

“What a waste of a good Lamington😝”

“I’m sorry Id put it apart and eat the lamington last. In saying that I wouldn’t touch it to start with… Heart attack food.”
We heard you Family! We realised how invested you were in this creation, so we thought that there was only one appropriate next step… to eat it. So, yesterday Mike and Corey nipped down to Coles, grabbed their ingredients and got into the kitchen. Here’s how it went…

Are you a business owner? Win double passes to ‘I Still Believe’

A naturopathic approach to improved immunity for kids