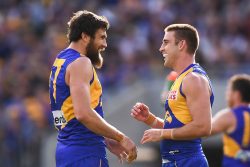 Saturday afternoon seen the Eagles came away with a 49-point win 18.13 121 to 10.12 72 at Optus Stadium. West Coast champion and dual Coleman medallist Josh Kennedy has returned to form, after been held to two goals in his previous three appearances. He kicked 7 goals and took 8 marks including his 600th career goal and is the 32ndVFL/AFL player to achieve that milestone. Jack Darling continued his great form with 21 possessions 7 marks and 2 goals, Willi Rioli and Jake Waterman also both kicked 2 goals each.

For North Melbourne Cam Zurhaar kicked 3 goals from 14 touches, while Jared Polec 31 disposals, 1 goal and Paul Ahern 27 possessions. After Brad Scott’s departure North Melbourne caretaker coach Rhys Shaw has done a really good job and is set to be offered a 2 year deal with an option of a 3rd.

West Coast have now cemented a finals birth, it is Adams Simpson 5th consecutive finals appearance in a row as coach, and now the eagles move to second on the ladder with the percentage-boosting win with 4 rounds to go. While the Kangaroos sit 14th on ladder with finals out of the equation they can now regroup for 2020 season.

The Eagles head to Marvel Stadium on Sunday to take on the rejuvenated Blues which is very much a danger game for the eagles. North Melbourne hosts Hawthorn on Friday night at Marvel Stadium, in a must win game for Hawthorn to keep slim finals chances alive.

We’re Hiring! Are you our new Digital Content Producer?