Jeziel shares his BIG Idea that will make him millions. The Re-Card the gift that keeps on giving 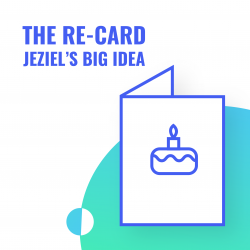 This week on The Drive Show, Jeziel shared his newest big idea that he believes will make him millions. It is called the Re-Card, the gift that keeps on giving.  You give the card to someone and they can reuse it and give it to someone else. The card has an LED display that is customisable. All you have to do is go to the website and type in the unique code on the card. Then you choose the design you would like, type in your message and it appears on the card. It costs nothing to redesign, only $55 for the initial purchase.

Although Jeziel believes this idea will not only save everyone money and the environment, Bec was a bit hesitant.  “I don’t think people will want to spend $50 on a card that they give away.”

Listeners agreed with Bec and said it would be better as a subscription based company. Make the card cheaper and charge people to change the card on the website. Stu texted in and said “I’m way too stingy for that. It would be a hard sell for blokes I imagine. Cards aren’t even on my radar most of the time.”

Would you invest on the subscription based reusable card? Let us know what you think but texting us or messaging us on socials.

Jeziel’s BIG Idea: The Stir Away