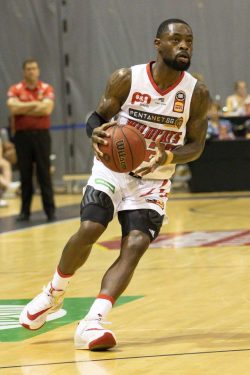 After a disappointing 78-87 loss to the Brisbane Bullets on Friday night, the Wildcats then headed to ILT Stadium Southland in New Zealand and bounced back with a gutsy 84-79 win over the Breakers.

After trailing by as much as 10 points late in the first half, the Wildcats put on a stunning performance in the third to claim the lead. From there on, it was closely contested but a clutch three from Terrico White in the dying seconds with scores tied sealed the win.

White had 18 points and 7 rebounds

Import Dario Hunt also had his best game of the season, piling on 21 points to go with 11 rebounds.

“We wanted to come out here and put a better effort forward than on Friday and I think we did that tonight,” said Hunt.

“We know they are going to make shots, they’re really good players, so we just decided no matter what we have to keep plugging away and it was great to get a win at the end.

“Rebounding was a focus for us this game. Last game we didn’t do a really good job at that so we just wanted to put our heads down and do the hard work.”

Perth dominated the glass, out-rebounding the Breakers 41-30, and coming down with an incredible 15 offensive rebounds which led to 16 second chance points.

Corey Webster was the Breakers most-dangerous with 21 points including five threes..

The Wildcats will take on the Red Hot ladder leaders Sydney Kings on Sunday @ Qudos Bank Arena in what will be a great game!

Your Weekend Planner: Our top 3 picks for weekend fun!