How Bec met her husband

What lengths did you go to for a date? 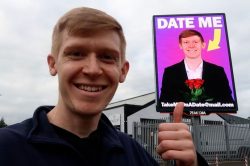 A man who has never been on a date decided to advertise himself on a billboard to find love. The 23-year-old has been single his whole life and had no luck on dating apps. So he decided to take a unique approach to meet his perfect match. He advertised a giant photo of himself with the simple message “date me'”. He received an influx of messages and found four potential women to take on a date. “It’s something silly and I don’t like to take life too seriously, so I think using a billboard to find a girlfriend reflects that. I made the design of the billboard myself and took my own picture which was one of the hardest things.”

Bec saw her future husband for the first time singing at church. “I asked my friend do you know who that is? She was like that’s Evan Jones. Is he single? Yep. Alright then.” So Bec invited him to hang out after church and he agreed. “But then we saw him leaving and my friend chased after him. They knew I had a crush on this guy in the worship team.” Bec’s friend even put her number in Evan’s phone and the relationship flourished from there.

What lengths did you go to for a date? Let us know by texting or messaging us on socials. Listen to the full chat below!