Has your kid injured you?

Parenting is not easy…You both have to wear bubble wrap. 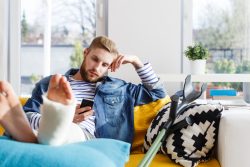 Jeziel’s son whacked him in the face with a head torch. “He got me right in the forehead. Then he freaked out and cried. It really did hurt.” Bec has been knocked in the face more times than she can count. “I’ve been head butt 2 or 3 times to the point it knocks the wind out of you.”

Emma’s mum was teaching her brother how to play golf. She was standing behind him and showing him how to swing. But when he swung back it went straight into her eye. She went to the hospital and fortunately nothing was broken just very bruised. Bec also injured her dad while playing golf. She was losing so she threw her golf club in frustration and it hit her dad on the head. “He had a massive gash in his head and we had to go to emergency to glue his head back together. I felt so bad!”

Jane picked up her daughter and her friend from school and stopped at the shops. She was taking the last bag from the boot and her daughter didn’t realise so she slammed the door shut. It hit her on the head and knocked her out. Her daughter’s friend freaked out thinking she had killed Jane. “I still have a little dent and the neurologist said you’ve had a fracture at some point and I said oh yeah it hurt.”

Laura’s husband and son were playing on the couch. When he took a wooden toy and threw it into the air. It hit her husband’s lip and cut it open. “He still has the scar.”

Richard and his son were having a nap when his son swung his arm and hit him in the eyeball. For weeks he was seeing rings of light in that eye. A couple of years later the pupil split and disappeared and now he can’t see out of that eye! “For the last few years, I’ve been enduring that.”

Has your kid injured you? Let us know by texting or messaging us on socials. Listen to the full chat below!