Bec and Jeziel decided to share some good news stories that will make you smile. 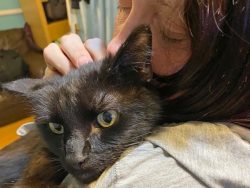 A family was reunited with their missing cat, after they recognised his meow during a phone call to the vet. Rachael Lawrence was on the phone with the vet regarding her other cat who had surgery. She heard a meow in the background that sounded like her cat Barnaby, who had been missing for eight months. But was told the meow belonged to a stray cat brought in a week earlier. But she couldn’t stop thinking about the meow and called back to ask if the stray cat was black with white. Blotch of fire on his back foot. The description was a match and Rachael rushed to the vet with photos to confirm. “I couldn’t believe what was happening. I just cried when I saw him, full on… I was sobbing, just absolutely howling. I just couldn’t believe it.

The U.S. are responsible for discarding more food than any other country in the world. So a new law in California will prevent food waste by requiring it to be donated instead of thrown away. All residents are required to separate organic waste, from the rest of their garbage. The new law also requires that supermarkets to donate all the edible food they usually would have disposed of and sent to landfills. “That is awesome, I love that!”

What did you think of these good news stories? Let us know your thoughts by texting or messaging us on socials.