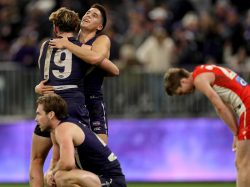 Saturday night In front of a low crowd of 33,594 at Optus Stadium Fremantle has held on for Very important victory and kept its faint finals hopes alive with a one-point win 7.10 52 to 7.9 51 over Sydney Swans.

Freo held on for a gripping triumph that releases the pressure valve on the club and coach Ross Lyon for now.

After four-straight losses, the Dockers had slipped from sixth on the ladder to 13th but are now back up to 10th and are 2 games within striking distance of  the Adelaide Crows in eighth spot

In the absence of superstar skipper Nat Fyfe elbow, stand-in captain David Mundy went to work around the Midfield with 25 possessions and 11 clearances with strong support from Reece Conca with 26 disposals and 5 clearances

Swans defender Jake Lloyd was outstanding all night, racking up an equal career-best 42 disposals, while Sam Reid with 3 goals Tom Papley 1.3 was threatening up forward.

Longmire will miss out on leading his side into September for the first time in nine seasons at the helm, the young Swans showed there is plenty to be excited about for the future.

The Dockers travel to Marvel Stadium for a tough encounter against the Western Bulldogs next Sunday, while the Swans welcome League leaders Geelong at the SCG. People are divided over this simple question