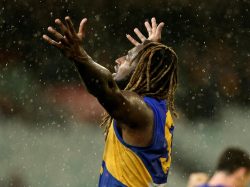 Star ruckman Nic Naitanui returned from his second knee reconstruction, his first game since round 17 last year, he won 41 hit-outs and had only 6 possessions but, his intesnisty around the ball was big in the context of the game.

Luke Shuey finished with 39 possessions 20 contested, 11 clearances and 9 tackles in a masterful display. When the game was on the line and the eagles needed something special shuey produced a 15 possession final term to ignite the eagles to a memorable victory.

Jack Darling was dominate up forward with 17 possessions 6 marks and kicking 5.2. His mate Josh Kennedy 68 game streak with at least one gaol a game ended.

Darling and Kennedy were able to bring the ball down for the likes of Liam Ryan and Cripps to wreak havoc and kicked 3 and 2 goals respectively.

Mark Hutchings spent the second half on the bench with ice on his left hamstring, and is set for a short stint on the sidelines. It’s unfortunate for hutchings who has been playing a really important role for the team to shut down the opposition’s important player.

The eagles are chasing their ninth straight derby win which would equal the streak set from the inaugural derbies, and will try to assert itself as Western Australia’s best team when it takes on Fremantle at Optus Stadium in Rac Derby number 50 on Saturday night.