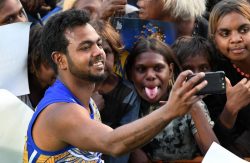 In front of a exciting crowd of 7164 at TIO Traeger Park, the eagles get an important win to keep top-two spot alive, its 13-point victory, 14.7 91 to 11.12 78 against Melbourne came after a massive scare. It was the first time in the Clubs history that the eagles have played in Alice Springs. It was a very special occasion for the likes of Willie Rioli, Lewis Jetta, Liam Ryan, Jarred Cameron and Francis Watson to play in Alice Springs.

It wasn’t the most convincing display against a determined Demons outfit, but Coach Adam Simpson would have been satisfied to come away from TIO Traeger Park in Alice Springs. West Coast lost skipper Shannon Hurn before the game with a calf complaint which meant that debutant Francis Watson come into the side, he had 14 possessions and was dashing off the half back line kicking the ball at 86% by foot.

When the game was on the line Dom Sheed stood up he had 34 possessions and kicked a very important goal in the last qtr to seel victory for the eagles. After a quite game last week, veteran full forward Josh Kennedy kicked 2 goals, while his counter punt Jack Darling who signed a 5 year deal, stood tall yet again with 16 possessions 9 marks and kicking 4 goals was the dominant forward on the ground. Darling is edging towards a rich vein of from.

Jeremy McGovern who looked to have suffered an ankle injury in the final quarter and hobbled off and should be ok to play this weekend against North Melbourne,  and after suffering a calf complaint Skipper Shannon Hurn should also be fit to play this Saturday.