Does your child have an imaginary friend? 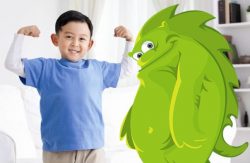 She was poking her hand through the doorway and counting. “I asked her Ruby what are you doing? She was like oh my friend’s in there. She’s invisible her name is Izzy.” So Kirste and Dan wanted to know does your child have an imaginary friend?

Abby had an imaginary friend. “When I was little I had an imaginary friend called Rosie. She was the same age as me when I had her which was 4-6 years. I would often talk to the wall though because I was talking to her” Bethanie had a group of imaginary friends called ‘the darlings’. “My parents have many stories about them but I have very few memories of them these days.”
Leah’s little sister had 3 imaginary friends. “Mary (she was nice), Friendly Friend (nice) and Kathleen Pooh (naughty friend).” It escalated one day when Kathleen Pooh was being very naughty in the car on the way home from school. So their Mum pulled the car over, opened the car door and demanded Kathleen Pooh got out! “My sister never spoke of these friends shortly thereafter, and she is now a very creative and successful woman!”

Does your child have an invisible friend? Let us know your thoughts by texting or messaging us on socials. Listen to the full chat below!