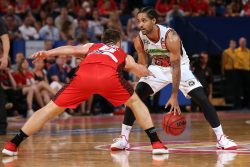 The Perth Wildcats suffered a heartbreaking, 79-81 loss at home thanks to Melo Trimble who steered the Cairns Taipans to a shock victory over the Perth Wildcats in front of a stunned RAC Arena.

Cairns led comfortably through the first half helped largely by Perth’s horrid shooting. The margin was clawed back in the final period, leading to a tense finish. Both sides had chances to seal the victory, with Bryce Cotton barely missing a half court buzzer beater.

Nate Jawai had a strong performance with 14 points, 8 rebounds and 5 assists in a physical matchup with Perth’s Angus Brandt 7 points, 9 rebounds.

After trailing for the majority of the game, the Wildcats put together a 24-15 final term, but it wasn’t enough to get over the line in a close contest.

Coach Trevor Gleeson said the quick start from Cairns put the Wildcats in tough position to get out of, especially when easy shots aren’t falling.

“The last quarter was great high intensity, getting after it, desperation stuff, but we allowed them to get their tails up early in the game,” he said

“We missed a lot of easy shots, and we seemed to get deflated when we were missing points instead of working on the defensive end.”

Damian Martin said the team was wanting to come out strong after being on the road for so long.

“You’ve got your head coach and coaching staff with full confidence in you, we really wanted to come out tonight in front of our home crowd after five consecutive games on the road,” he said.

“Instead Cairns were probably the more aggressive team that first quarter.

“We can’t play our best basketball when we’re 12 points down, the desperation has to be there from tip-off.

“If we can start the game with that desperation, I think we’re going to get a lot more wins than the losses we’ve had of late.”

In an off shooting night Wildcats Superstar Bryce Cotton lead the Wildcats with 20 points, four rebounds and three assists.

17 of his points came in the second half when the Wildcats were mounting their comeback.

Terrico White pitched in 17 points, 5 rebounds and 3 assists, while shooting 60 percent from the field.

Perth has now lost six of the last seven games, and will look to get back on track when they take on Adelaide next Thursday at Titanium Security Arena