Andrew Hamilton, the backyard philosopher, joins Kirste and Dan on brekky to share some wisdom. This morning he shared a story about his son succeeding through perseverance. 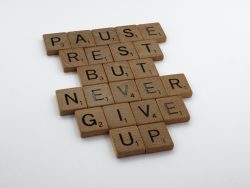 Andrew’s son Sam is shadowing his dad to learn the retic trade before Hammo Snr takes off on an extended caravan trip. One afternoon, a fairly easy job came through just around the corner. Sam said he’d be alright to go alone and sort it out quickly before knocking off for a surf. As it happened, what should have been a fairly simple solenoid replacement was anything but.

Being an external processor, as Sam toiled away firstly trying to find the solenoid, then trying to fix it, he regularly rang his dad for advice.  Despite Hammo Snr’s offers to come by and help, Sam was adamant he should be able to sort it out himself.

As time ticked on, Hammo began to think about perseverance. He realised that you learn perseverance by persevering. If you quit early, or quit too soon you then you become good at quitting. As Paul says:

“Not only so, but we also glory in our sufferings, because we know that suffering produces perseverance; perseverance, character; and character, hope.”

When six o’clock rolled around and Hammo heard the distinctive sound of his son’s ute return home, he couldn’t help but wonder whether he’d succeeded, or would need another crack in the morning….

To find out more about perseverance (and whether Sam solved the solenoid issue), check out the podcast below:

What have you bribed someone to do?

How to Strengthen the Moral Character of Our Kids Through Prayer

Natalie Nicholls: Communicating with our kids