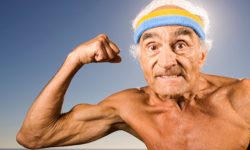 Have you ever heard the phrase old man strength? It’s often used to describe how sometimes older people have wiley strength you’re unaware of.

The other day, Hammo’s son said to him “hey dad, let’s have an arm wrestle”.

Bare in mind his son is 17 and pretty well built according to Hammo and the last time they had an arm wrestle he was probably 11 and was beaten pretty easily.  So in the back of his mind, he was thinking “oh what have I gotten myself into”… but Hammo beat him with his old man strength!

“I wanna’ speak to those of us who are currently in our middle age!”

Lately, Hammo has been reflecting on where his life is headed, he’s 55 now so he’s been thinking about what the next 5, 10, 20 years will look like. You can look at 55 and think, “I could cruise into 65, hitch up a caravan and travel Australia”, but Hammo doesn’t believe in retirement, he doesn’t think it’s a biblical concept.

He was reading Joshua chapter 14 when he felt GOd speak to him. Moses sent Joshua and Caleb into the promise land to see if it could be claimed. Long story short they do and settle in the land. Then 45 years later Caleb said to Joshua, it’s time for me to claim my piece of the land. Joshua had his piece of the land, but Caleb hadn’t claimed his yet and he said this to Joshua:

So here I am today, eighty-five years old! 11 I am still as strong today as the day Moses sent me out; I’m just as vigorous to go out to battle now as I was then.

When Hammo read those words he felt God saying “you’re 55, you could have another 30 good years! So much of it is the attitude and how you look at life.”

So if you’re in the middle of your life and you’re thinking the rest of your life could be a nice wind down from here, Hammo doesn’t think so! He believes God has heaps of stuff for us to do, right into our very, very old years.

Listen to the whole chat with Andrew Hamilton on The Brekky Show below:

Every day Andrew Hamilton answers these 5 questions in his journaling