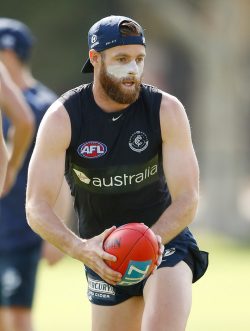 CARLTON’S worst fears have been realised, with Co-captain Sam Docherty suffering another ACL injury. The defender went down at training in an innocuous incident on Monday morning, and is expected to require his second knee reconstruction in little more than a year.

The club said it was considering all options for Docherty’s treatment before committing to a timeline for his recovery.

Docherty first injured his left knee during pre-season training in November last year and missed the entirety of the 2018 season as a result.

He had cut short his summer holidays in order to continue his recovery this summer, impressing Carlton officials with the manner in which he had applied himself since returning to training.

Named alongside Patrick Cripps as Carlton’s new co-captain in October, Docherty is now expected to miss most, if not all, of the club’s crucial 2019 campaign.

“It’s clearly a huge disappointment for Sam to experience such cruel luck, we are all feeling for him right now,” Carlton head of football Brad Lloyd said in a statement.

“The way he tackled his rehab this year was simply incredible and he could have played at the end of last season before the decision was made to hold him back.

“If the last 12 months have shown anything, it’s that Sam is made of everything that is required to return to his elite best once again.

“Our entire football club; players, coaches, staff, members and supporters will now support Sam to ensure he will complete his rehabilitation once again with the entire Carlton family by his side.”

Kennedy on track for Round 1