Andy Day is an English actor, comedian, entertainer and television presenter known for his work on the BBC’s CBeebies channel. Specialising in shows about animals and nature such as Andy’s Dinosaur Adventures, Andy’s Prehistoric Adventures, Andy’s Wild Workouts and more. 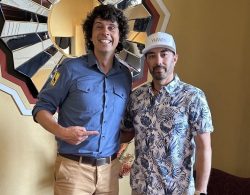 Andy always knew he wanted to work in children’s television and started his career as a presenter on CBeebies House. “I always had a passion for natural history and adventure…Kids TV was always my aim.” When he was just 20 years old he went for the audition and was chosen out of 2000 applicants. “It could have been any of us I just so happened to be different from the other presenters. I was very lucky.” An executive recommended him for a show originally called Max’s Wild Adventures. “From there we did a pilot. Andy’s Wild Adventures and Andy’s Dinosaur Adventures. We had such a great team behind it all.”

His show ‘Andy and the Band’ showcases his love of music. “I’m a big lover of music. I always wanted to be in a band. I enjoy singing so I got a band together and wrote an album.” They played their first gig at Glastonbury. “Not many people came originally. Then all of sudden it rained then everyone came in. A few older fans left singing our songs.” Andy is currently in Perth for his show Andy’s Amazing Adventures at the Regal Theatre. “It’s got a hint of every show I’ve done/ It’s got lots of interactions its got songs and raps.”

You can find out more about the show here. Let us know your thoughts by texting or messaging us on socials. Listen to the full chat below!