A woman was locked in the hairdressers halfway through treatment after all the stylists went home. She claims the hairdresser left her in the salon with dye in her hair after she was told someone else would finish. So Bec and Jeziel wanted to know when have you been locked in. 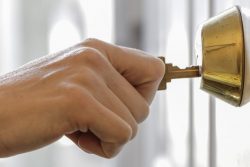 Tom and his family were in Europe and went on a tour of a castle. They climbed up a tower, looked around and when they went to open the door to leave they realised it was locked. He managed to climb through the small window and went to the reception who helped him unlock the door. “In Europe during winter it can be -20 degrees so it would have been a grim night for the family.”

Rachel’s mum couldn’t sleep so she decided to vacuum the house. But while she was vacuuming the pantry she ended up getting locked inside. Not wanting to wake the rest of the family she decided to tap S.O.S in Morse code on the wall and hoped her son would come to save her. “He’s in the army…maybe his survival instincts will kick in pull him out from his deep sleep and he’ll come to rescue me.” Eventually, she resorted to banging on the walls and Rachel’s dad woke up and rescued her.

Ally was in Italy on a European tour. They were at a restaurant and just before they left, she went to the bathroom which was in the basement. But she ended up getting stuck in the stall and there was no space for her to climb out. She was banging on the door and screaming for help but when people heard her they couldn’t understand what she was saying. Luckily the tour director did a head count and they realised where she was. “It was traumatic I am still carrying it now.”

When have you been locked in? Let us know by texting or messaging us on socials. Listen to the full chat below!