A woman walked around with a ‘sore foot’ for a week before finding out it was broken!

A woman walked around with a ‘sore foot’ for a week before finding out it was broken! 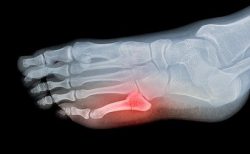 Chontel Duncan hurt her foot but didn’t suspect she had done any real damage. So for 5 days she continued walking on her foot until it started to swell. Eventually she went to the physio, and her x-ray results confirmed she had a broken foot! So Bec and Jeziel wanted to know, how long did it take you to realize you were seriously hurt?

Johnathan’s foot hurt for 2 months, and he had no idea why.  “People were praying for me. Eventually, glass shards started coming out of my foot. I don’t how it got in there. I pulled it out then I was fine.”

Daniel’s friend had a bad motorbike accident. The surgeon said he just had a sore back. Daniel’s friend looked at his x-ray and said it looked like he had broken his back. But the surgeon replied that it healed since he last broke his back. Turns out he broke his back in a car accident 10 years ago and never knew! “He was pretty lucky it didn’t do any severe damage.”

Michelle dropped a knife into the palm of hand. She thought it was a little cut so she ignored for 6 weeks, despite the pain in her fingers. Eventually she went to a specialist who  insisted that she had surgery immediately. “I had actually severed the nerve in the my fingers. They were able to fix it up.”

How long did it take you to realize you were seriously hurt? Let us know your thoughts by texting or messaging us on socials. Listen to the full chat below!