A gender reveal stunt started a bushfire in California

Reading Time: 2 minutes
Every day The Breakfast Show serves up a piping hot dish of Extra News. The stories you may have missed but will definitely want to hear! Today a landlord’s sweet gift to his tenant made headlines. Tune into extra news from 7:30am every week day.

Gender reveals are no longer an intimate conversation between expecting parents and their doctor. Now they’re a whole trend, usually taking place as a day event where some kind of stunt makes

the announcement for the parents and their friends and family.

You’ve probably seen a bunch of reveal parties where the couple pops a balloon that has been filled with pink or blue confetti. You may not have seen the reveal party of Hollywood actress Shae

Mitchell. She had two friends dress up and stage a fight as a blue and pink Poweranger where 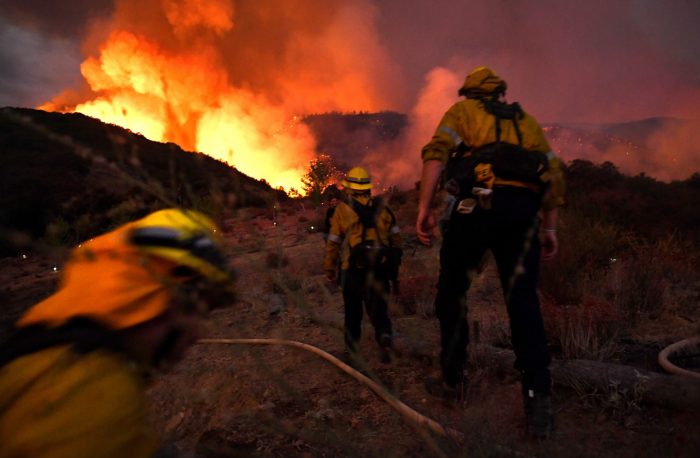 the winner of the “fight” was wearing the colour suit that corresponded with the baby’s sex.

However, this expectant Californian couple were probably pretty surprised by what happened at their gender reveal party.

They trekked to a popular hiking spot, huddled with their children as a friend filmed on their phone … and within minutes they were fighting a bushfire. The couple had planned to launch a firework that would release a trail of coloured smoke, pink or blue, that would tell them what their newborn would be. In a nightmare-ish turn of events, the sparks from the firework engulfed the 1.2M grass that surrounded it in flames.

CCTV of the area shows the couple frantically trying to snuff the fire with water bottles. Sadly they were no match for the combination of dry vegetation and a stiff breeze on this hot Californian day. The fire is still burning and is currently only 20% contained.

After all of that, the couple never found out what they are having!

Did you have a gender reveal party? Did anything go wrong? We’d love to hear from you. Text us, email us or send us a message on socials.

Catch up on all of today’s Extra News below:

Are you considering a job change in 2021?

Mum Lyfe: How did you hurt your back?

Apparently no one wants to earn $3,800 a week in Queensland

Sara started listening to 98five while in prison

WA is officially, scientifically, indisputably the best place … for apples

Would you attend the wedding after receiving this invite…