Shannon ordered some lingerie from her friend who accidentally delivered it to the wrong house. So Shannon went next door and asked the man who lived there if he had her package. He awkwardly handed her the bra, which was in a clear plastic bag and explained that he thought it was for his wife. “He’s looking at me and I’m looking at him and we’re both trying not to look at the black bra. I died a thousand deaths that day and so did he.“ 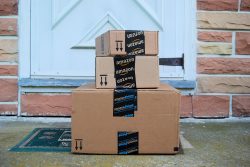 So this morning on Brekky she wanted to know when did your package get delivered to the wrong address. Or did you receive a package that wasn’t yours? Sharon and her husband were helping their daughter move. When they arrived at the house there was so much fast food at the front door that they didn’t order. “It could have been someone who hadn’t changed their address on the delivery app. We couldn’t even eat it because it had gone cold.”

When Meran was a teenager a family showed up unexpectedly while they were having dinner. They said they got a message on their answering machine to come over for dinner. But it was actually someone else from their church who invited them over and they thought it was her dad. “It was so awkward! We ended up raiding the fridge and chucking a few more things on the table.“

Heather received a package with her address but not her name, so she returned it to the sender. A few days later a suspicious man came to their door and asked for his package, he had used their address on purpose. “My husband came to the door and said you can’t use us as a postal service. The man was really really cross.”

Have you received someone else’s package? Let us know your experience by texting or messaging us on socials. Listen to the full chat below!