What do most 17-year-olds up do with their free time? Hang out with their friends? Maybe learn to drive? Some metro-league sport?

Not Brianna Thompson. Brianna travelled all the way from home town Brisbane to Europe to complete a double crossing of the English Channel.

What kind of challenges does someone like Brianna face when swimming almost none stop for 22 hours between England and France and back again?

Potential hypothermia, hoards of jellyfish, having to eat through a tube and losing a layer of her tongue.

Brianna completed her swim in 22 hours and 37 minutes. She only had one break at the half way point where the currents were so strong that she couldn’t eat solid food and had to be fed through a tube.

The one thing that helped her battle hypothermia in the 16* water was the adrenaline that built up as she got closer to the finish.

“As my body began to shut down towards the end, I could feel the cold creeping into my body,” she said. “But then the adrenaline of finishing kicked in the closer I got and I knew I was safe from hypothermia.” 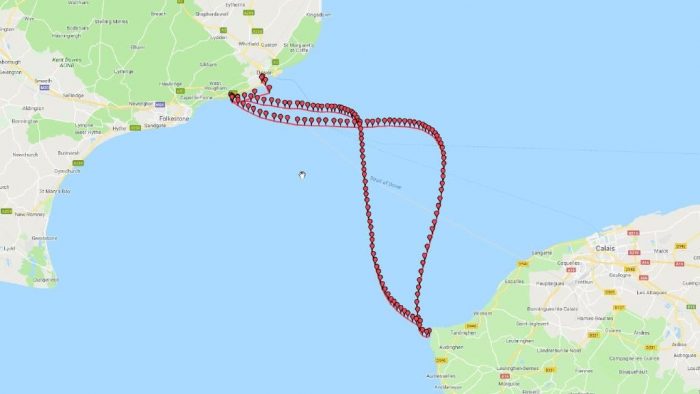 The route taken by Brianna on her double crossing swim of the English Channel.

After completing this collosal stunt was when the real pain settled in. Brianna’s muscles were so sore she could barely sit down or sleep. Her tongue was stripped and throat so swollen that she couldn’t eat anything. Which is totally heartbreaking considering I imagine she’d been dreaming about fries and dirty bird that entire 22 hours.

Brianna is the second youngest person to have ever completed a double crossing and the youngest to have completed 3 legs in 12 months! She even beat her original time. She clocked 11 hours and 52 minutes for a one way swim of the English Channel last year. This time around she swam from England to France in 11 hours and 5 minutes!

She’s easily one of the most impressive 17-year-olds I’ve ever heard about, just watch her swim in the dark.

Brianna is almost 21hrs into her 2-way English Channel crossing and still looking strong! The mental pain is in full flight as well as severe cramps in her legs. Tim Denyer is pushing her for this final assault onto English shores. About 1.5hrs to go. You could smell the POMs from there! Come on Brianna Thompson! Elise Stapleton you must be so proud.

A NT woman shoos away a crocodile in extreme Aussie style

Why Did The Emu Cross The Road?

Aussie kids are getting smarter and parents can’t keep up